We have primarily made the choice to focus our efforts to improve outcome of liver cancer patients, as it is the second most deadly cancer worldwide.

With more than 780,000 new cases diagnosed every year, liver cancer is the fifth most common cancer  and the second most deadly cancer worldwide. Men are significantly more affected overall than women. Patients are usually diagnosed with late-stage disease, when no curative therapy is longer available. Then, systemic chemotherapy represents the best available treatment option for these patients. In Europe, the 5-year survival rate is poor, with less than 10%.

Hepatocellular carcinoma (HCC) accounts for 90% of primary liver cancers occurring predominantly in patients with underlying chronic liver disease and cirrhosis. With an estimated 746,000 deaths in 2012, it is the second most common cause of cancer-related death, exceeded only by cancers of the lung (Torre 2015). The incidence of HCC on the rise, coupled with a high mortality rate worldwide and limited therapeutic options at advanced stages, makes HCC a significant unmet medical need. Without treatment, HCC progresses rapidly, with the median survival of patients with advanced disease between 4 and 8 months; patients with terminal stage disease have a median survival inferior to 4 months (Verslype 2012).

The current standard of care for unresectable advanced HCC is first-line Sorafenib or Lenvatinib, multi-kinase inhibitors. Regorafenib was approved for use in patients with HCC previously treated with Sorafenib or Lenvatinib, based on results from the RESORCE clinical trial (Bruix 2017). Overall, these drugs provide minimal clinical benefit with the modest extension in median overall survival and primary resistance or intolerance to these drugs remains a significant issue. 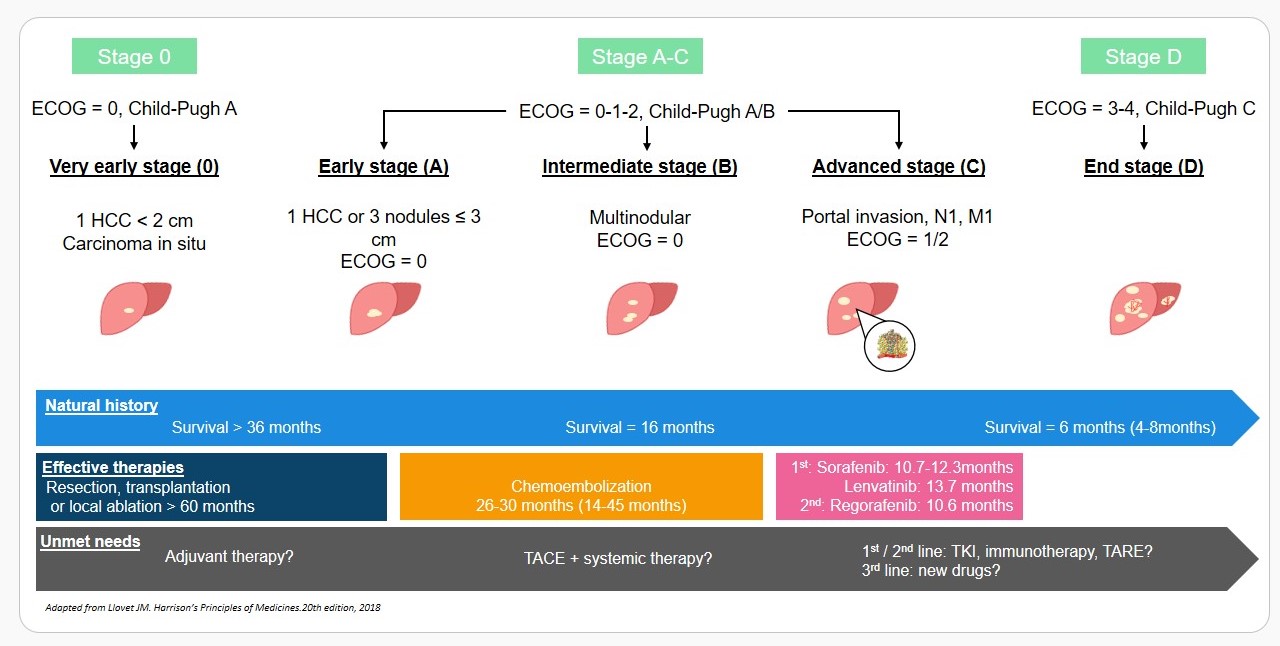 Intrahepatic cholangiocarcinoma (iCCA) is a rare malignant tumor of the biliary tract with growing incidence and dismal prognosis. It is the second most important primary liver malignancy, which adds up to 10-20% of primary liver cancer diagnosed globally. Several risk factors of chronic inflammatory damage and increased cellular turnover have been established, such as hepatobiliary flukes, primary sclerosing cholangitis, biliary tract cysts, hepatolithiasis and toxins (Khan 2005). Cirrhosis, chronic hepatitis B and C, obesity, diabetes mellitus and alcohol liver disease are emerging as warning conditions for iCCA (Palmer 2012). iCCA early diagnosis is still a major challenge since patients with early stage disease are often asymptomatic.

The only potentially curative treatment option for patients remains surgical resection. Unfortunately, the clinical outcomes of patients undergoing liver resection are disappointing, with a 5-year survival rate of 25% to 40%. Chemotherapy is the standard of care for patients with advanced or recurrent iCCA, with gemcitabine-platinum combinations, and other gemcitabine- or fluoropyrimidines-based regimen being the most commonly used (Eckel 2007, Valle 2010). The combined use of gemcitabine with platinum agents, have been shown to improve survival outcomes compared to gemcitabine alone or to 5-fluorouracil /folinic acid (Yang 2013). Several phase 2-studies evaluating the activity of the gemcitabine-oxalipatin combination in the first-line setting proved modest efficacy in patients with advanced cholangiocarcinoma, with median progression-free survival and overall survival of 3.4 and 8.8 months respectively in the whole population, and 3.8 and 11.0 months respectively in the non-gallbladder population (Andre 2008). Some others studies are ongoing with nivolumab, therapeutic vaccine, ALK inhibitor, Met inhibitor, humanized monoclonal antibody, paclitaxel and 90Y transarterial radioembolization, but the need for novel therapies with original mechanisms of action is also warranted in this cancer.